Bloody Impertinence: An Apology Regarding the Order of Preachers & the Gothic Genre 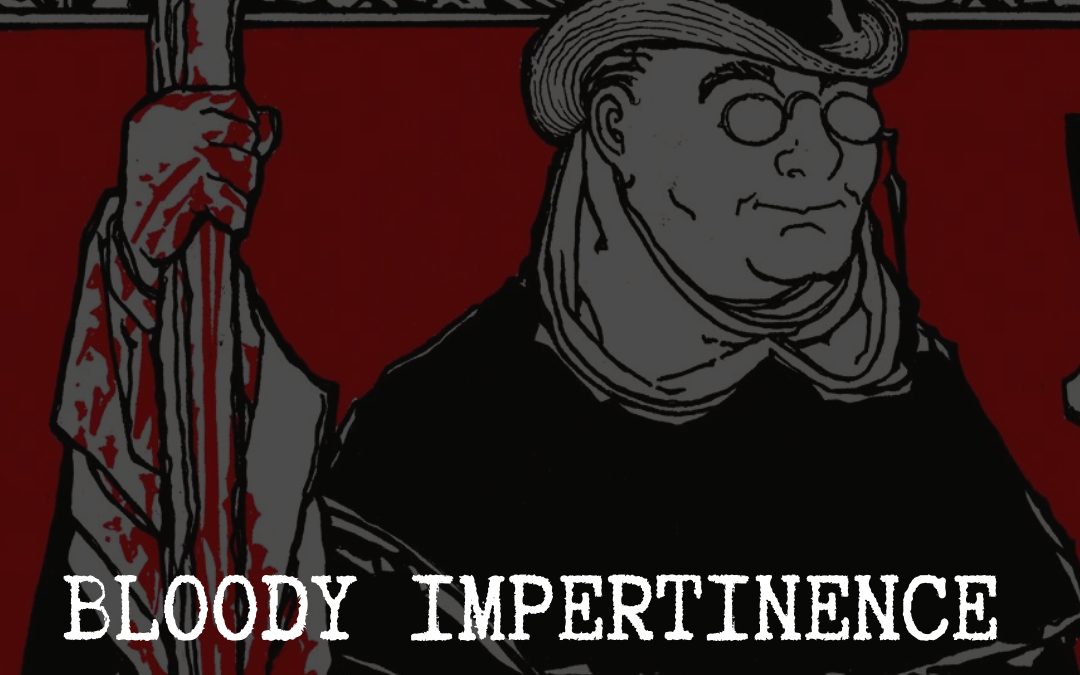 As the Holy Father himself wrote (the translation is mine): “In recognition of the extraordinary achievements of the followers of holy father Dominic, and, indeed, as proper appreciation of the talents and strength of the Ordo Praedicatorum, we hereby give to them the task and vest them with the powers of vampiric exorcism, as well as the dispatching of other revenant creatures.”

With the publication of my first Gothic novel, A Bloody Habit, I foisted upon the Order of Preachers a fictitious history and the work of battling outrageous preternatural threats. While I commit similar presumption toward the Order of Friars Minor in Brother Wolf, readers will note that my stake-toting Dominicans return and are deeply embroiled in this adventure as well. Even as the characters of Gothic novels insist that the plot is a matter of life and death, readers could react in horror and call it utter rubbish, the sort of thing concocted in the fertile mind of a presumptuous, flippant laywoman.

Today I present my Apology. In doing so I confess to impenitence for this presumption. This Apology operates in the classical sense of the word: I offer my defense for the foisting of the genre upon that religious order. (Since this justification arose almost entirely post hoc, I claim the creation of Dominican vampire slayers as a moment of authorial inspiration.)

There are two justifications for this. The first is perhaps the most obvious: as Josef Pieper once succinctly put it “leisure is the basis of culture”. While this is a worthy approach, I prefer the second option: an examination of the heresy against which St. Dominic himself so passionately preached. The Order of Preachers was established in response to the flourishing twelfth- and thirteenth-century sect known as the Albigensians. The sect believed in a form of neo-Manichaeanism, asserting the co-existence of equally powerful principles of good (represented in the spiritual) and evil (represented in the material). Thus, things spiritual are utterly good, and all things material are evil. The repercussions for morality and for theology were considerable. Most significant for this Apology is the fact that the Albigensians dismissed both the hypostatic union, believing that Jesus was very perfect but merely a man. and the resurrection of the body, and commended suicide (principally through starvation). It is also worthy of note that one of the major influences in support of growth for the heresy was the scandal of sin among Christians and especially the clergy.

We can, of course, toss off the glib rejoinder: “No Albigensians around these days, so the Dominicans are free to handle vampires!” There are, perhaps, none who go by the name “Albigensian”, but the substance of the heresy is alive and well, in myriad forms and under a hundred different titles. Let us consider the vampire or any other evil preternatural creature. He operates from the notion that evil can offer an alternative to the reality created by God—an alternative commensurate to that reality, which is the flip side of the Albigensian coin. Where the Albigensian zealot would argue the body is inherently evil, the blood-drinking undead embraces that evil as the basis for his existence. The vampire wishes to make the morally corrupt body exhibit incorruption. He wants eternal incarnate life in a fallen state. This is an absurdity. In grasping at that absurdity, the vampire breaks the natural law. Remember (as Father Thomas Edmund Gilroy, O.P. says more than once): evil cannot create, it only twists what God has created. Preternatural reality is a distortion, an aberration, not something new. The undead existence of the vampire, perpetuated by the anti-Eucharistic act of blood-drinking, is as obsessed with a distorted view of the Incarnation as were those thirteenth-century heretics.

The Eucharistic significance must not be ignored. With the dismissal of the Incarnation, the Albigensian denied the sacramental economy. They rejected the Bread of Angels part and parcel with their rejection of all things material.

In addition to the connection of vampires and Albigensians, we must ask: in combatting such a threat, should not our experts be those most skilled in the hylomorphic understanding of realty? While St. Dominic, who in his holiness was said only to speak to God and of God, might not have been interested in reading Gothic novels, and St. Thomas Aquinas’ time was otherwise engaged in systematic theological scholarship (not to mention mystical experiences), their example and labors must be a strong grounding for any white-robed friar who sets aside his books and picks up his vampire kit.

There is Marian significance here as well. The Albigensians rejected the beauty of teaching regarding Our Lady. The Dominican dedication to the Blessed Mother, which rises from the tradition that Our Lady gave the rosary to St. Dominic as the truest weapon, provides yet another perfect counterpoint. Our Blessed Mother could look with eyes of mercy toward fallen men from the foot of the Cross which bore the weight of her beloved Son. Those same eyes of mercy are terror and utter confusion to all preternatural threats. Our Lady—as beautiful and terrible as an army in battle array (Song of Songs 6:4,10)—has perfect coercive power over demons. The vampire-slayer who bears her beads at his waist is well armed indeed.

All of the above also speaks to the appropriateness of the Franciscans in overseeing the rehabilitation of werewolves. The Dominican emphasis upon Truth and their scholarly precision will provide insight critical to the diagnosis and dispatching of preternatural threats. There are logistical challenges, as both the narrator of A Bloody Habit and the hero of Brother Wolf note. “The process of scholastic discernment does not operate well on a battlefield,” admits Father Thomas Edmund Gilroy. Franciscans, on the other hand, with their emphasis upon the will, possess the compassion to see past the monster, to see the person who is the victim of his own wanton disorder. Compassion is irrelevant to the vampire because he gives none and deserves none. He is to be extricated clinically. Further, that same emphasis upon the will, though compassionate, provides the framework for the discipline necessary for rehabilitation. (Nota Bene: Some of the events of Brother Wolf may prompt readers to question whether an even more rigorous disciplinary attitude, joined with a strong emphasis on physical labor, as one might see in the Benedictines or the Carthusians, might better serve a volatile lycanthrope. This question should have been entertained by Pope Benedict XIV when, according to Father Thomas Edmund, he first looked into this business.)

At the same time, since the operations of the Evil One are all chained together in a tyrannical hierarchy of cruel, abusive power, I aver that my Dominican vampire-slayers have an obligation to work with their brown-robed brothers when the wolves prove fractious. The vicious lycanthrope is a subservient creature. Where there are wolves, there must be more powerful creatures somewhere behind them—and such creatures are definitely the concern of Father Thomas Edmund and his fellows.

I could now branch into a consideration of the history and evangelistic utility of the Gothic genre. There is such an opportunity for the preaching of Truth in the realm of monsters! J.R.R. Tolkien’s incomparable essay “On Fairy Stories” captures this perfectly, in its identification of the three virtues of fantasy literature: Recovery, Escape, and Consolation. As Joseph Pearce has remarked more than once (here I draw from his essay “How We Rediscover Reality Through Fantasy” in Faith & Culture):

Fantasy literature accesses a reality beyond the mundane world of facts, allowing the qualitative to penetrate the merely quantitative, and enabling meaning to permeate the factual. It goes beyond seeing things only as they are, or as they seem to be; it sees them as they are meant to be. It does not accept the status quo, merely because it is the ‘real world’, but explores the possibilities of different and better worlds. It transcends the barren limitations of ‘how things are’ to explore the fruitful possibilities of ‘how things should be’. This intrinsic idealism clearly has implications as regards the way that fantasy literature interrelates with reality.

Were I to delve further into the richness of genre here, it would afford me opportunities for making censorious comments about the Enlightenment and various literary figures whom I hold in personal dislike (particularly that self-absorbed, lascivious bounder Percy Bysshe Shelley). Instead I briefly note that, in addition to the obvious theologically coherent foundation for this fictional world I have concocted, there is a genre justification. In part, this is owing to the historical aestheticization of Catholicism to capture a sense of “things beyond”. When an author wishes to demonstrate things weird and wonderful, things preternatural or supernatural, or (dare we say it) things metaphysical, he introduces a Catholic priest or a nun into his tale. This introduction has, in literary representation over the last few centuries, been counterbalanced by strong anti-Catholic themes, but even this conflicted approach illuminates yet another important aspect of those vampire-slaying members of the Order of Preachers: like any religious, a Dominican friar, who spends his days contemplating Divine Realities and, in the case of priests, confecting the Eucharistic sacrifice, will keep ghouls, ghosties, and vicious, blood-drinking demons in proper perspective. They would be wretched narrators of Gothic fiction (because they would be far too calm) but are for the same reason the perfect vampire-slayers/lycanthrope-wranglers.

This brings me to the final point I present in defense (if any further defense is needed): when I speak with Dominican friars about my novel, and tell them: “You fight vampires,” at least half of them, without batting an eye, have chuckled: “Of course we do.”

I rest my case.

Eleanor Bourg Nicholson is the author of several works of fiction, including the Gothic novels A Bloody Habit (Ignatius Press, 2018) and Brother Wolf (Chrism Press, 2021), a literature instructor for Homeschool Connections, and a homeschooling mother of five. She is also a fully-professed Member of the Lay Fraternities of St. Dominic (which makes her novels even more shocking). Read more at her personal site: eleanorbourgnicholson.com.