Memento Mori, the Romance Genre, and the Catholic Imagination 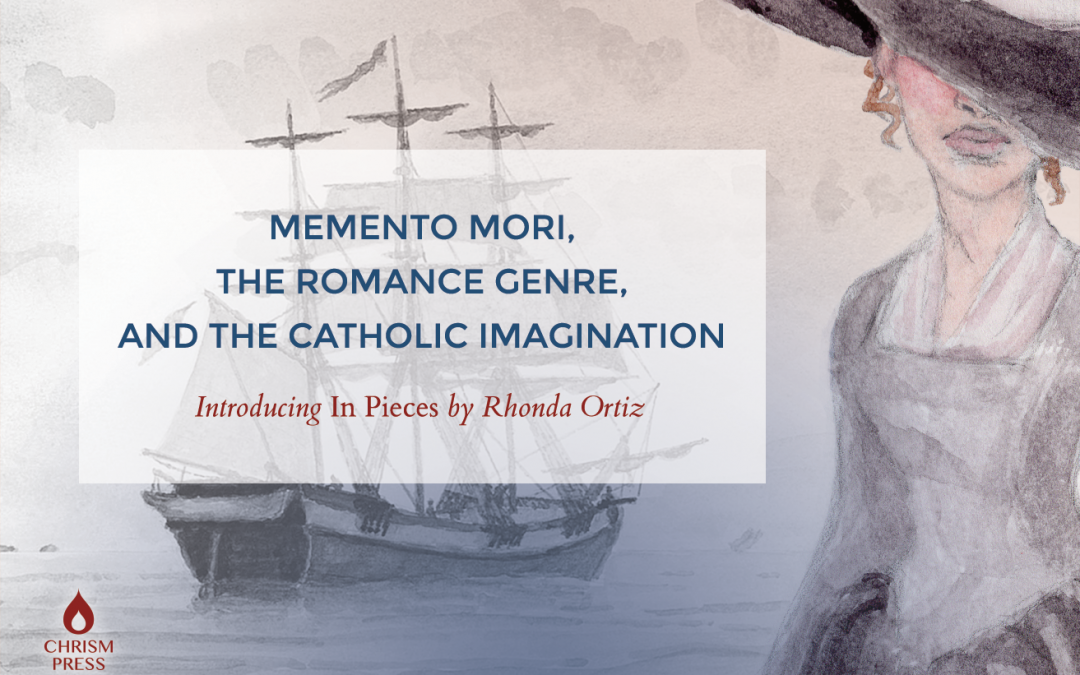 Molly Chase surprised me. When I set out to tell Molly’s story, about a girl reeling from trauma and the childhood friend who loves her, I assumed I was writing a classic courtship love story. Molly Chase, I reasoned, was Anne of Green Gables with more pathos and politics. I fully intended to write a compelling story; nevertheless, I had accepted the inevitability of its abiding by the usual genre conventions and tropes.

Most readers recognize romance genre conventions. Boy meets girl; rivals and obstacles keep them apart. There are rituals and secrets, helpers and hinderers, a first confession, a moment of physical intimacy, a break-up, and the “proof of love,” in which one of the lovers sacrifices him or herself for the other without hope of return. Proposal, acceptance, happily ever after. Finis.

First, while drafting Molly Chase, I had resolved the courtship plot between Molly Chase and Josiah Robb, bringing them to the expected proposal. But Molly had yet to recover from her father’s suicide, nor had she forgiven him for it. In a typical, genre-abiding romance, she would have resolved these conflicts within the course of the courtship. The fact that she hadn’t meant the story wasn’t over. I was writing not one novel, but several.

Second, I had a vision of Molly’s death—a vision so powerful that I cried for several days afterward, causing my husband to wonder if I had lost my marbles.

I told him I was grieving.

He reminded me that Molly is a fictional character.

I realized then that my Catholic memento mori sensibilities were pushing the romance genre beyond its usual bounds. The first book, In Pieces, ends with a proposal, but the series continues into marriage, until death do them part. That, too, would be a courtship story, but not a typical one.

Realizing this made me giddy. Not every story presents an opportunity to play with genre conventions. Molly Chase might seem like an archetypal courtship story at first glance, but it isn’t.

Why? Because death changes everything.

Sacramental marriage points to the divine union between God and man. Courtship, therefore, is analogous to the divine wooing, to grace. Romance conventions mirror this, particularly the “proof of love” mentioned above—the lovers’ self-sacrifice is a direct participation in Christ’s Passion. Without meaningful, altruistic self-gift on the part of the lovers, a love story falls flat. The Cross shows us what love looks like. Romance genre conventions follow suit.

This applies to any well-drawn courtship story. Yet Molly Chase extends beyond the allegorical to the literal. Josiah woos Molly, but so does Christ. Molly and Josiah’s courtship and marriage are precisely the vehicles by which God will court Molly for Himself. The novel features not one, but two love stories: one human, one divine. They run parallel to each other, earthly marriage intertwining with the heavenly one until it gives way at death.

Here, the romance genre conventions apply to both stories. Both Josiah and God are cast in the archetypal role of Lover, opposite Molly’s Beloved. They also are both cast in the archetypal role of Helper—first, God helps Josiah win Molly, and then God enlists Josiah as His own helper vis-à-vis their marriage. The grace of the sacrament has its effect: God’s love and Josiah’s love are of a piece, bringing Molly healing, then sanctification, and finally theosis. In Molly Chase, the divine romance looks eerily similar to the earthly one.

This has been an ambitious understanding, both thematically and in terms of plot structure. I took Sigrid Undset’s masterpiece Kristin Lavransdatter as my model for both. My humble story differs from Undset’s in several key respects—Josiah is a good man whereas Erlend Nikulaussøn is not, and the blame for the fracas between Molly and her father lies mostly on his side, rather than the other way around. Kristin is the instigator; Molly is the wounded party. (Plus, my narrative tone is far lighter, and unlike Undset, I am no literary genius!)

Yet both stories both follow a woman along her path of sanctification through the joys and trials of marriage: courtship, vows, lovemaking, children, family, church and society, sin and brokenness, misunderstanding and estrangement, slander and political intrigue. Both Kristin and Molly grapple with the meaning of suffering. Both taste the sweetness of the Cross.

My first duty as a storyteller is to be faithful to the story I’ve been given and tell it as well as I can. I didn’t plan on following Molly and Josiah into the intimacy of marriage. But obedience to the Muse has its fruits. Beyond its first raison d’être—to be an entertaining tale—Molly Chase has become my exploration of the deeper meaning of marriage and of the Theology of the Body. In pushing the romance archetypes to their fullest extent, Molly Chase further “Christianizes” the love story insofar as the plot itself acknowledges that wedding vows are not a conclusion but an opening toward an even greater love affair.

In Pieces (Molly Chase, Book One) is now available! Visit chrismpress.com/books/in-pieces to learn more and to purchase.