The City of God, the City of Man: An Interview with Author Maya Sinha 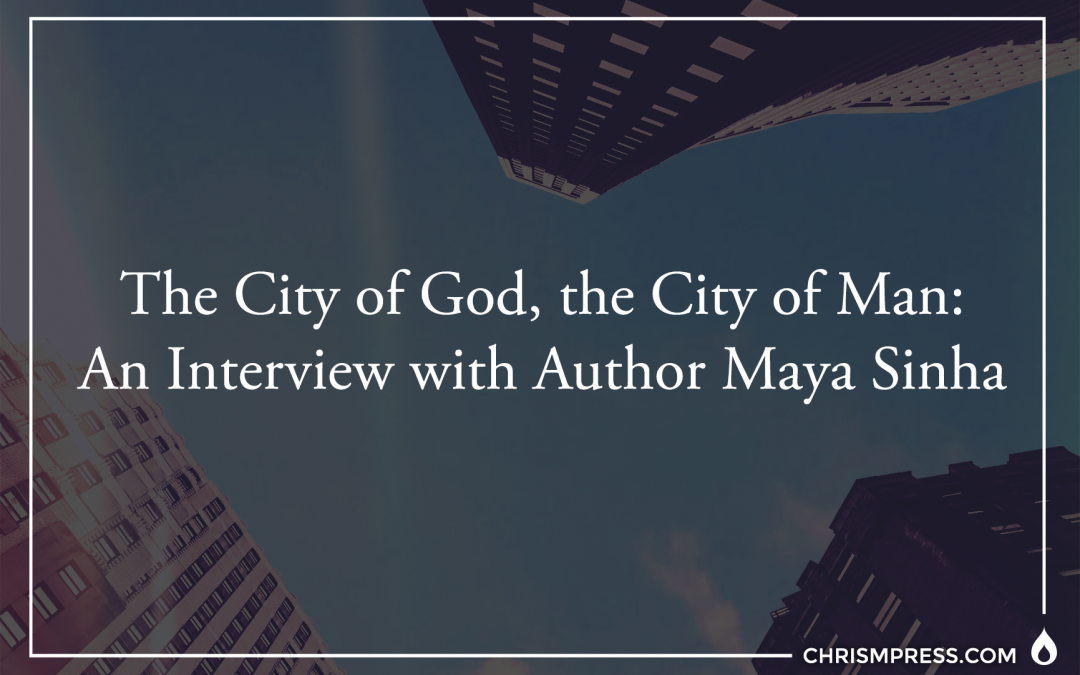 The City Mother by Maya Sinha is now available for pre-order! Click here to learn more and purchase.

Q: Tell us about your book.

The City Mother is a novel set in modern-day America, around 2010. It tells the story of a young newspaper reporter, Cara Nielsen, who rather impulsively gets married, moves to the big city, and starts a family. It’s a literary novel in that it engages with ideas, as Cara tries to make sense of her increasingly difficult situation. But it also has the fun, readable elements of genre fiction, especially psychological suspense or what is sometimes called “domestic noir.” I’ve also been a humor columnist for years, so there’s a lot of humor in it, too.

Q: Where did the idea for the story come from?

The story is very loosely based on my experience having two children in two years while living and working in the Bay Area. I spent a lot of that time on maternity leave from my law firm or between jobs, since I much preferred being home with my babies. I took copious notes on what life with an infant was like, trying to not only capture the experience but to understand what it meant apart from what the culture had told me. I remember putting my laptop on the diaper changing table and hastily typing up notes for a scene that would later make into the book, full of details I never would have remembered years later.

The novel’s plot, however, is entirely made up. Once I had a collection of notes, I studied books on novel structure and tried to tell a story that would be compelling and surprising. The City Mother has elements of Gothic fiction: a vulnerable young woman confined to an old, ornate building full of odd characters, where things may not be as they seem. Before I began stitching my notes together, I studied Ira Levin’s 1967 novel Rosemary’s Baby for inspiration.

Q: The city in The City Mother is never identified as a specific place. Why not?

At the risk of sounding grandiose, I felt that Cara’s story and the challenges she faced were universal, not tied to any one place. Our techno-capitalist society gives young women a particular set of messages about career, family, and motherhood, and, stated as diplomatically as possible, those messages leave a lot out. Once a woman has a baby, she undergoes profound changes that put her at odds with the “girlboss” ethos that’s been urged on her from cradle-to-corporate-office. Often, she’s also isolated, far from her own family, and her husband is not equipped to understand what’s happened to her. Cara’s emotional and spiritual struggles are not specific to San Francisco or New York; rather, they suggest that the 21st century’s atomized, achievement-based culture is hostile to women in ways that are seldom acknowledged. Instead, millions of unhappy women are given psychiatric meds and told to take up yoga.

The city in the novel’s title is also suggestive of St. Augustine’s City of Man, as opposed to the City of God. In that sense, “the city” is earthly life. Cara must figure out how to be a good mother in a fallen world.

Q: The novel’s protagonist, Cara, is a film aficionado who often compares her own life to the movies. What role do movies play in this story?

Cara resembles Binx Bolling in Walker Percy’s 1961 novel The Moviegoer, another character to whom movies feel more real than life. As an only child in a rural town, she’s restless and bored like Dorothy Gale in The Wizard of Oz. From an early age, movies offer a fantasy life, an escape.

Steeped in the movies, Cara thinks of city life as glamorous. But when she gets there, she finds it unpleasant, even menacing. She wonders whether the movies lied when they suggested life was beautiful, adventurous, and full of high-stakes drama. In fact, her own life is like that, just not in the way she expected.

Cara is also a sensitive person, not merely attuned to movies, but to dreams and mystic visions. Her love of stories and vivid imagination are traits that make her odd and quirky, but ultimately lead her to the truth.

Q: The novel’s publisher, Chrism Press, is a new Catholic imprint of the Christian fiction publisher WhiteFire. Yet, for the vast majority of the novel, Cara is not Christian or Catholic, but a typical modern striver with no religious identity. In what way is The City Mother a “Catholic novel”?

I started taking notes for City Mother when my children were infants, long before I became Catholic. Like G.K. Chesterton, I spent years reading about the Catholic faith, slowly developing a Catholic worldview, before I finally gave in and converted.

Like Cara, I was raised with essentially no religion. But after having children, I realized that secular life didn’t make sense. The things it most prized – materialism, fun, and status – were not good enough for my kids, who were obviously made for something better than the rat race. Hedonism was beneath their dignity. Nihilism was not worthy of them. Scientific materialism was too small a worldview for these precious souls whose worth could not be empirically determined and who were not mere cogs in a soulless machine. When you see human beings up close as a parent, your deep love for them is a vital source of information about reality itself. Parenthood is, itself, a form of conversion, in which you die to your old self and find your greatest happiness in caring for someone weak and helpless. Mothers, especially, are biologically programmed for this change, an ordinary miracle we moderns disregard as unimportant, as if having children is just a logistical problem of “work-life balance.” But deep down, every parent knows it’s more than that.

The City Mother describes a long conversion process, a burning-away of the old self, that looks and feels like simply being a mom. Only years later does Cara recognize the Church as her true home: the place that recognizes the sacredness of her experience and has done so for thousands of years in its veneration of Mary.

Q: Cara is a reader who often turns to literature for guidance. Which authors influenced you in writing this book?

My main influences as a writer fall into three categories. First are literary comic writers like the British novelist Martin Amis, whose brilliant, hilarious, and edgy novels I read obsessively in my twenties. I would also put the French novelist Michel Houellebecq in this category, along with the American writer Ottessa Moshfegh, whose 2019 novel My Year of Rest and Relaxation is a dark comic masterpiece. These writers’ novels tend to be nihilistic, disturbing, and obscene: not books you want to leave lying around the house for the kids to read. Yet, by taking postmodern nihilism to its comically absurd conclusion, these perceptive, funny artists pave the way to a new (or renewed) interest in religion.

Second is the Catholic convert Muriel Spark, who may be in a category of her own. She is a superb prose stylist who has a firm grasp on the slippery subject of good and evil. Her novels are wickedly funny and acerbic, yet grounded in a traditional Catholic worldview. It’s Dorothy Parker meets Fulton Sheen.

Third are suspense writers, especially the great Agatha Christie. Christie’s prose is so clean and precise that her novels written in the 1920s and ‘30s seem fresh and timeless. Her ability to create narrative tension through dialogue and a few subtle details is astonishing. I also admire Gone Girl by Gillian Flynn, who was strongly influenced by Christie and wrote a smart, engrossing novel about a troubled marriage that spirals out of control.

Q: The City Mother deals with good and evil and includes some dark moments. Yet the narrative voice is frequently ironic or comic. How does humor figure into a novel about evil?

To paraphrase the novelist Walter Kirn: Humor is simply the truth. Nothing is funny unless it is, on some level, true. People who tend to see the humor in events are taking the express route from Point A to Point B: a lightning-quick apprehension of the underlying truth of what’s happening. That’s why, in an oppressive system, no one is allowed to make jokes: because they’re too revelatory of the truth.

Cara, the novel’s narrator, has an ironic cast of mind. She takes things seriously and, at the same time, notices when they are funny or absurd. Her ability to see the comic truth of situations is related to her heightened sense of the numinous or supernatural.

That’s the sophisticated explanation. The more down-to-earth reason is that I enjoy comic novels. I tend to find humorless novels a slog.

Q: Who do you hope will read The City Mother, and what do you hope they’ll take away from it?

I hope that many readers will find it interesting and entertaining. But I especially hope young women will read it. For them, The City Mother is a message in a bottle.

Lacking guidance, Cara blunders into a life that proves very difficult: starting a family in a high-priced city; with a secular, career-focused husband; no nearby relatives to help her; and no religious or community support. It is almost impossible for her to stay home with her kids, because her life is not set up to be a hands-on mom. Instead, she is under immense pressure to get back to work and leave the “childcare” to others. Yet, caring for her own children is the thing she most wants to do. If someone had told her that feeling was normal and predictable, she could have planned accordingly. I hope this novel will prompt these discussions between young women and their female relatives, their husbands, and each other.

I hope older women will see some of their own experience of motherhood reflected in this novel. Women don’t get many “novels of ideas” written for them; those types of books are usually written by men (e.g., Amis, Houellebecq) and thus lack insight into the female experience. Just as Mary Cassatt’s paintings of mothers and young children were striking and original, because not many painters (except Catholics!) were interested in that subject, a literary novel about the mother of a baby and toddler is unusual and, hopefully, refreshing.

Of course, there’s plenty in the novel for men to like. I hope the character of Cara’s husband, Tim, is fairly and sympathetically portrayed. He, too, is in a situation for which he has been totally unprepared. As Cara says, the two of them are like children themselves, bravely walking hand-in-hand into the woods.  I hope we can do a better job preparing the next generation to form strong, functional families. Maybe this novel has a modest role to play.