The Making of a Cover: Markmaker by Mary Jessica Woods 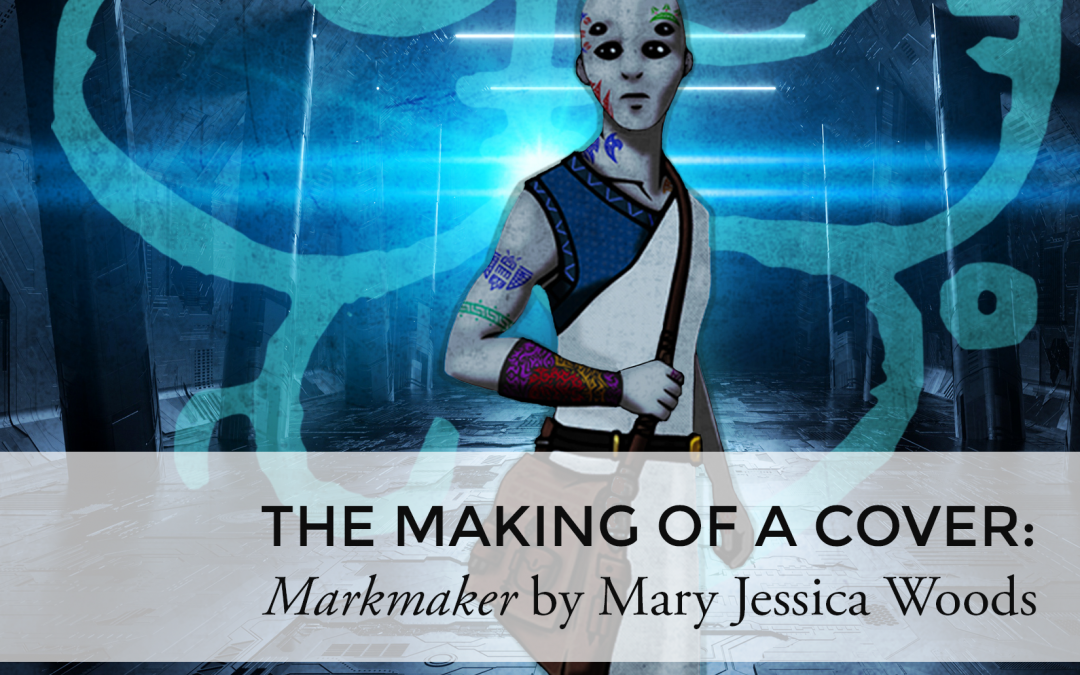 There are plenty of sci-fi stories about aliens. But there aren’t many novels about alien tattoo artists. The unique focus of Markmaker demanded an equally distinctive cover. This task combined the vision of the author, Mary Jessica Woods, with the talents of artist Donan Scholl and cover designer Roseanna White. The final result was a truly collaborative piece of art that captured both the space fantasy setting and the emotional, character-driven plot.

The story of Markmaker is told through the eyes of Mariikel Serix, a Noxxiin tattoo artist born and raised on a massive generation ship. According to ancient Noxxiin laws, markmakers are supposed to tattoo the truth on people’s skin—but Mariikel finds himself coerced into giving a mark of banishment to an innocent man. Tormented by this falsehood, Mariikel begins exploring the ship’s Underbelly, the world of the exiles, in search of both justice and redemption.

The Underbelly is important in the story both as a physical location and as a symbol of the protagonist’s harrowing interior journey. Thus, Mary’s initial idea for the cover image was simple: Mariikel standing in a shadowy metal corridor, clutching his artist’s satchel, looking over his shoulder with a wary expression.

The Chrism team liked the concept, but then the question arose: who would create the portrait of Mariikel? The team knew they needed an artist who could accurately portray the Noxxiin race and their unique alien culture. Because the whole story was told from an alien’s perspective, there were few opportunities in the narrative for detailed descriptions of Noxxiin anatomy (just as a human narrator would take for granted the basic features of other humans). The cover would need to provide this image for the reader.

With this in mind, Mary reached out to her friend and creative collaborator, Donan Scholl. Donan already had a special connection with the world of Markmaker: he had invented the Noxxiin race as part of his sci-fi role-playing game, Watchpoint, which had been the original inspiration for Mary’s novel. He was also a talented artist and had been drawing the aliens and their ceremonial tattoos for years. In other words, he was the perfect person to create a portrait of Mariikel.

Donan graciously agreed to help with the cover art and soon got down to work. He already had a solid grasp of what Mariikel should look like: he had created a portrait for Mary’s book website several months previously, based on the author’s own sketch of the character.

The anatomy, clothing, and tattoo designs were more or less settled, but the pose and facial expression did not quite fit Mary’s vision for the cover—they were too static and not emotional enough. So after some experimentation, Donan created a rough concept piece, including the new figure and a sketch of a possible background:

Everyone loved the new, dynamic pose and composition, so Donan went ahead and finished his character portrait. The new drawing shows Mariikel wearing a simple tunic and sandals—typical Noxxiin garb, which evokes their ancient, tradition-bound culture—and grasping the strap of his markmaker’s satchel, which holds his tattooing pens and inks. Meanwhile, his sensitive expression and four dark eyes give a glimpse of his introspective, compassionate personality.

Mariikel’s portrait also features several tattoos that are mentioned in the novel, including the Serix clan-mark on his neck and the artist’s mastery-mark on his forehead. Most important is the vivid tattoo covering his right arm—a gift from Haza’ruux, the strange old markmaker who uses sigils that no one else can read. This mark is crucial to Mariikel’s character arc, and his quest to translate it drives much of the story. Donan made this tattoo beautifully distinct by using dense, intertwining lines and vibrant hues of red, purple, and gold.

Next, Donan sent his finished artwork to the cover designer, Roseanna White. After consulting with Mary about the general color and mood that the cover should have, Roseanna found the perfect background image: a dark, metallic corridor with ominous pillars and scifi-esque panels and lights. Then she combined the background and Donan’s character art to form a first draft of the cover.

Roseanna’s draft also included a third design element: a mysterious, twining sigil representing the tattoo of exile. Mary had created this symbol during the book’s editorial process, while figuring out how to describe the marks that featured prominently in the story. She had sent her sketch of the exile-mark to the Chrism team, thinking they could use it within the book to decorate chapter headers. So she was surprised—and slightly taken aback—when Roseanna instead used the design as a major element in the cover image.

At first, Mary was uncertain about the use of her own art on the cover. However, both Roseanna and Karen Ullo, Mary’s editor, assured her that the design of the exile-mark looked amazing—and was also a perfect fit for the themes of the story. Mary agreed that the mark could stay, but requested that the figure of Mariikel be centered and brought closer to the front, so that the glowing symbol in the background was framing him, instead of overshadowing him.

With the composition settled, Roseanna spent some time refining the image, adding shadows and a texture filter to better integrate the character art with the background. The team also discussed different font options, eventually choosing an angular, handwritten-style font that struck a balance between the genres of fantasy and sci-fi. The final cover presents a dramatic image that clearly depicts a futuristic, alien setting, but also hints at ancient magic and mystery—a fitting combination for the story of an extraterrestrial artist.

Markmaker is now available for pre-order! Click here to learn more about the book and to purchase.