“The Tattoos He Reveres Are Not Always as Truthful as They Seem”: An interview with Mary Jessica Woods 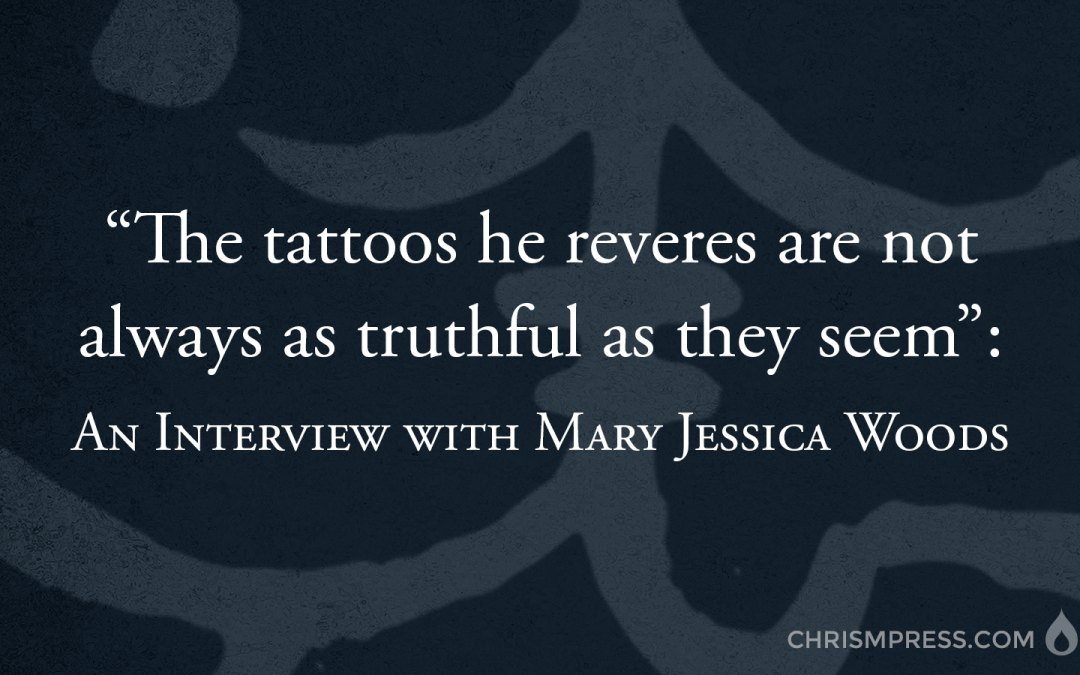 Tell us about your book.

Markmaker tells the story of Mariikel Serix, an alien tattoo artist living in a society where everyone’s life history is written on their skin. He is devoted to his craft, but after he is coerced into giving a mark of banishment to an innocent man, he realizes that the tattoos he reveres are not always as truthful as they seem. He has to grapple with this moral dilemma while facing increasing persecution from the Ascendance, a warmongering political faction that wants to use the ceremonial tattoos for its own ends.

It’s an intense, character-driven story set in an immersive alien world, with political drama, mystery, and a hint of magic.

Where did the idea for the story come from?

The world of Markmaker began as a tabletop role-playing game created by my friend Donan Scholl. We were classmates in college, and I was a player in his sci-fi RPG, entitled Watchpoint. I absolutely fell in love with the world Donan had come up with—the extensive lore, the zany characters, the space fantasy vibe. I’d never written science fiction before, but I was so taken with the setting that I started writing my own spin-off stories based in the Watchpoint universe.

After graduation, a few of us from the role-playing group stayed in touch and continued sharing stories and lore. One day, Donan wrote a list of the ceremonial tattoos used by the Noxxiin, one of the main alien races in the Watchpoint world. This fascinated me—I’d been wanting to write a story about the Noxxiin for a while, but I’d always felt that I didn’t understand their culture well enough. The list of tattoos, however, gave me a real glimpse into their way of life. It also raised intriguing questions like: what is the role of the Noxxiin tattoo artist? What are the laws surrounding this crucial art? And what kinds of moral dilemmas would arise in a society where these marks define your identity?

The idea of a rogue tattoo artist—a markmaker who is at odds with the laws of his own craft—sprang to mind and immediately grabbed my interest. I named this new character Mariikel Serix, and the rest is history.

Exile is a major theme in Mariikel’s story. What is its significance, and how did you handle this idea in the novel?

For the Noxxiin, family bonds are everything: in society, in law, and even in their religion. Their concept of salvation involves maintaining their connection—represented by their clan tattoos—with their honorable ancestors. So exile, for them, is not merely a legal question; it has a spiritual component, more like excommunication.

Mariikel does not have an actual exile-mark, but for most of the story, he still feels like an outcast. Even though he has a loving family and a strong community, he has long carried the subconscious sense of being an outsider. This feeling only intensifies once he realizes he has broken his markmaker’s oath. So he naturally sympathizes with others who struggle to belong—which is why he feels compelled to help the ship’s exiles, even when it means defying the laws he’s been trained to preserve.

There is a sense, too, in which the whole Noxxiin race is in exile. For centuries, they have been nomads, travelling through space in their fleet of massive generation ships. Now they have returned to the planets that their ancestors fled long ago, only to find them colonized by humans—or, as the four-eyed Noxxiin like to call them, half-sights. But the Noxxiin, like humans, are a fallen race. Their fervor to regain their homeland turns into a desperate war, leading them to commit atrocities that violate their own laws and ancient traditions. Ultimately, their quest to reclaim the ancestral planets echoes a deeper yearning for a spiritual home—like our own human longing for a state of lost grace.

What was something that surprised you during the writing process?

Many things surprised me during the writing of this book, but one of them has a name: Haza’ruux Serix. Haza’ruux was not even my own creation; he first appeared as one of Donan’s characters in the Watchpoint RPG. When I wrote the first draft of Markmaker, I originally included Haza’ruux on a whim, as a fun little cameo from the game. However, he promptly informed me that he was appointing himself as Mariikel’s mentor and taking control of the plot, and there was nothing I could do about it. I surrendered without protest—it’s best not to argue with the mad markmaker of Clan Serix.

What are some stories that influenced you while writing this book?

There are so many! I have always loved stories that are a mash-up of fantasy culture and sci-fi technology—a couple childhood favorites include James Gurney’s gorgeously illustrated Dinotopia books and the (underappreciated) Disney film Atlantis: The Lost Empire. The idea of a society that has a high level of technology but also has an ancient, almost tribal culture has always appealed to me. I also enjoy sci-fi stories where the central conflict is deeply moral and personal, such as in Orson Scott Card’s Ender’s Game and Christopher Nolan’s film Interstellar. For the politics plot of Markmaker, I took a lot of inspiration from the TV series The Expanse—the first two seasons do an excellent job of combining compelling character arcs with interplanetary political intrigue.

There are plenty of non-scifi influences on this book as well. I think the narrative voice owes something to C.S. Lewis’s Till We Have Faces, which is a retelling of a Greek myth. That book, although set in a pre-Christian world, is still one of the most emotionally raw and spiritually honest novels I have ever read. I also took a cue from Watership Down—that classic (and terrifying) tale about a society of rabbits—which has one of the most compelling depictions of a fictional religion that I have ever seen. Finally, towards the end of Markmaker, I found myself unconsciously using imagery that was reminiscent of the Aeneid. This was funny to me—I confess, I like Homer better than Virgil—but once I realized I was using that classical trope, I totally leaned into it.

The Noxxiin culture is ostensibly pagan—their religion revolves around ceremonial tattoos and ancestor worship. Given the setting, in what way can Markmaker be considered a Christian or Catholic story?

First of all, it is a Christian story insofar as it is a moral story. As George MacDonald once said about fairy tales, the fiction writer can invent new worlds and fantastic settings, but he cannot change the order of good and evil. The Noxxiin are not human and do not have the same salvation history that humanity has. But they still recognize natural law, the existence of a divine creator, and the reality of a spiritual realm beyond this physical world.

Second, this story can be considered Catholic in its sacramentality. The Noxxiin treat their tattoos in much the same way that we treat our sacraments—a physical sign of an invisible reality, which confers spiritual power or protection. At the beginning of the writing process, I was quite unconscious of this influence, but so many early readers pointed it out that the connection quickly became clear. The markmakers are priestly figures; even the ceremonial words they say while painting tattoos are reminiscent of liturgical language. I credit much of this to my experience of being Byzantine Catholic—the Eastern expression of Christianity has a distinct poetry and physicality of worship that is very beautiful and evocative. Some of that ethos made its way into my imagination of Noxxiin society, as well.

My primary hope is that people will enjoy the novel as a good story. If they experience truth or beauty while reading it, I believe I have done my job as a Catholic author.

What are you writing next? Is there a sequel to Markmaker in the works?

I did leave Mariikel and company in something of a predicament—so yes, I hope to write a sequel or two to complete his story. It may take me a while to wrangle all the characters; they are currently running wild in my brain with total disregard for the needs of plot structure. I would also love to write another book with Mariikel’s cousin, Askko. He is a warrior for the Ascendance (the antagonistic faction in the novel), but he’s a good person at heart. He also has a propensity for getting into trouble, which of course makes for great drama. And those are only two of the many characters I would like to write about. Suffice to say there are plenty of stories left to be told in this world!