Truth in the Flesh: Tattoos and Tradition in the World of MarkmakeR 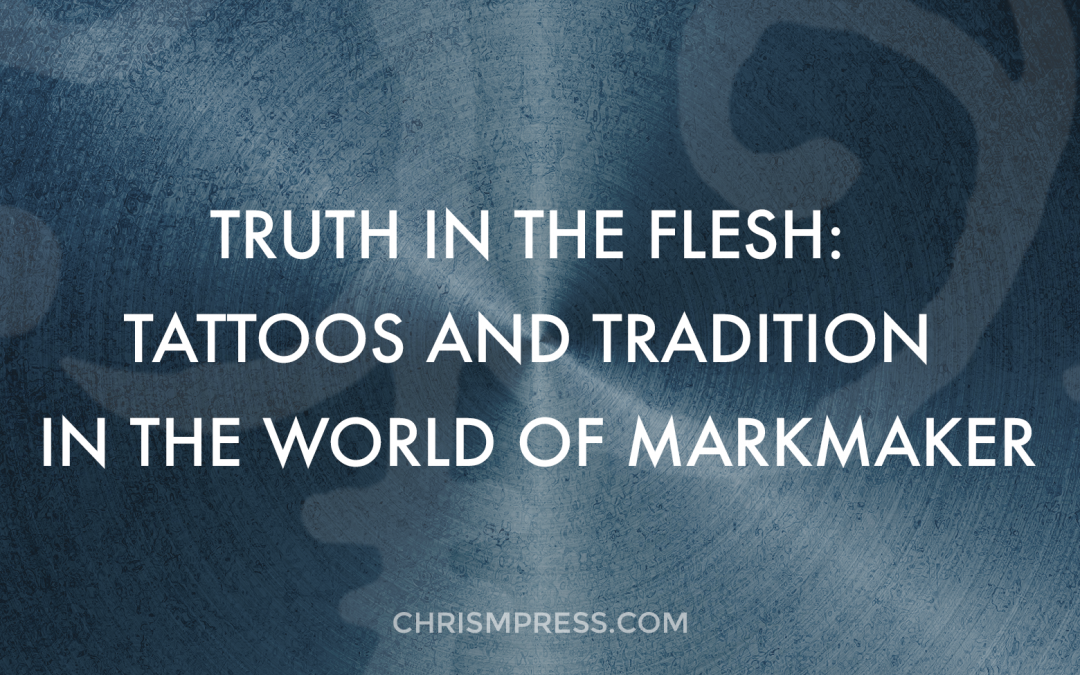 When I first began writing Markmaker, I had nothing but a name and a premise: Mariikel Serix, an alien tattoo artist who had broken his oath to paint the truth. I didn’t know why he was an oathbreaker; I assumed he was involved in forgery or smuggling or some other criminal venture. But I didn’t know for certain. He wouldn’t tell me.

Instead, during that initial draft, I had to follow him—from the prestigious tattoo studio where he worked, through the vast worldship where he lived, down into the darkness of the Underbelly, the realm of the exiles. And there I watched him take his pens and freely give marks to a destitute young mother and her newborn child.

Oh, I thought. Oh. So that was the kind of person I was writing about.

This man was not a mercenary, seeking wealth or power. Neither was he a renegade, breaking the law for the thrill of it. He was an artist, born into a tradition that he loved and revered—a tradition which, nevertheless, he found himself compelled to defy for the sake of these outcasts.

There is a trope in young adult fiction—and even in adult fiction, especially in sci-fi and fantasy—of the rebel. In these stories, the hero encounters an oppressive social order and, spurred by righteous anger and aided by a band of loyal friends, overthrows that order to establish a more just regime. There is nothing wrong with this trope; it speaks to a certain truth and makes for dramatic storytelling. But personally, I sometimes wish for more nuance in the execution of this plot. We are all formed by the cultures into which we are born. The flaws we perceive are not merely “out there” in society; they also exist in our own hearts. And often, the discarding of tradition—even a tradition with real failings—simply wreaks more damage on a culture that is already deeply wounded.

So I didn’t want to write a hero who rejected his tradition. I didn’t want a protagonist who could hold himself apart from his heritage and condemn it. But he could not be blind to injustice, either. Instead, he had to undergo something even more painful: the crucible of loving his inheritance while also recognizing its evils.

Mariikel is the ideal character to suffer this dilemma. He is a markmaker, a tattoo artist, in a world where tattoos are the primary expression of status, law, and religion. This makes him a keeper of civilization, a guardian against the crimes that threaten the social order. But this order is not perfect—as Mariikel discovers when he finds himself compelled by political pressures to give a mark of banishment to an innocent man. Not only is the law he upholds corrupt, but he is also an agent of that corruption, complicit in a visceral, personal way. He feels his fault like a defilement of body and spirit—a falsehood in the flesh.

This is an excruciating revelation. But Mariikel does not respond by giving up his profession. He cannot. His tradition, though broken, is the only one he knows. Instead of rejecting his flawed heritage, he turns towards it. He faces the abyss of his people’s guilt. As an act of atonement, he descends into the Underbelly to bring marks to the exiles.

So Mariikel is a rebel—but he is a thoroughly reluctant rebel. The irony, of course, is that he breaks the law not because he is a bad markmaker, but because he is a good one. His conscience points him beyond the limitations of the law towards the living wellspring of truth. He defies tradition not to overturn but to renew it.

This renewal comes about not by revolution or legal reform, but rather by the individual encounters that Mariikel has with the exiles. As Haza’ruux, the old hermit-artist, tells him, he can see beyond ink to the truth of hearts. With each tattoo that he gives to the outcasts, he gropes unconsciously towards a purer form of his own tradition—a law aligned to the complexity of reality, offering both justice and compassion to those in need.

This pursuit of a truer tradition is a painful and often lonely journey, as it thrusts Mariikel outside the conventions of society and into direct conflict with the order he is sworn to protect. But even as he suffers this isolation, he unwittingly founds a new community among the people he serves in the Underbelly. In this unlikely renewal of tradition, love overcomes the failings of the law. In the end, even the mark of exile becomes a strange bond of kinship—a sign of contradiction for all who know the grace that comes through suffering.