The Making of a Cover: Eleanor Bourg Nicholson’s Brother Wolf 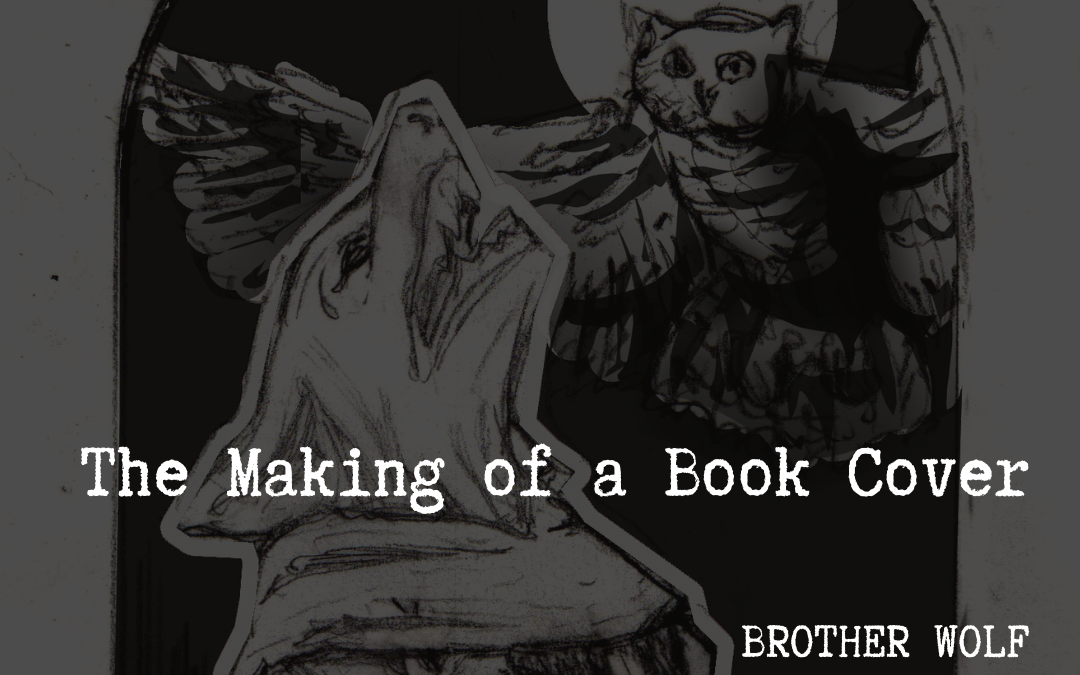 The plot of Brother Wolf is driven by the character of Jean-Claude, a werewolf-turned Franciscan who has relapsed into active lycanthropy. The heroes must hunt him down before he wreaks bloody destruction and damns his soul in the process. Thus, the creative team wanted to capture the moment of metamorphosis and the inner turmoil of the wolf.

At the same time, they wanted to highlight the character of the narrator, Athene Howard. Athene’s narrative voice arose out of two points of inspiration: the first was the original (failed) narrator, Jean-Claude’s sister, who could not tell the story without an obnoxious dose of angst; and the second was a dim echo of Miranda in Shakespeare’s The Tempest: “O brave new world, that has such people in ’t!” Athene brings brightness and innocent enthusiasm to the story, as well as a robust knowledge of Greco-Roman mythology.

The cover of Brother Wolf befits its title: a werewolf in Franciscan robes howls beneath a full moon. At Eleanor’s request, Chrism Press called in the inimitable Matthew Alderman, whose work graced the front of A Bloody Habit, to produce a woodcut-esque sketch for the central figure. Matthew is a graduate of the University of Notre Dame’s distinguished classical architecture program, a published illustrator and designer, a frequent speaker on church building and sacred art, and a Knight of Malta—in other words, the perfect person to draw a Franciscan werewolf.

Matthew hunted down several images as inspiration for Jean-Claude, including an engraving which captures the pious legend of the meeting of St. Francis and the “Wolf of Gubbio”.

He investigated the habit worn by Franciscans in 1906 to discern any important details. At Rhonda’s encouragement, he added patches to the habit, making it more ragged.

Lengthy discussion ensued about the face, hands, and feet of the figure. There were important pitfalls to avoid. Capturing the werewolf mid-transformation would, for instance, have risked bringing in an “Abbott and Costello meet Wolfman” vibe. Matthew’s initial sketches showed the wolf tearing at his cowl with two claw-like hands.

Eleanor expressed concern that this might look like he a pompous canine baritone, holding his lapels, or Were-Superman tearing off his mild, alter-ego disguise. This was cemented when her two-year-old Beatrix Potter aficionado saw the sketch and cried: “Mr. Fox is singing!”

Matthew rapidly adjusted the sketch so one contorted, half-claw hand reached down, a stance ironically reminiscent of Bellini’s St. Francis. After the creative trio indulged in an edifying exchange of cultural references (including Planet of the Apes and MST3K Werewolf), they decided on hands and feet that merge wolf and man, leaving the howling snout of the face to register the full force of lycanthropic intensity.

The full moon, a staple for werewolf transformation, was relatively simple, though the three did experiment with scale, position, and color of the finished luminary.

At this point in the composition, Rhonda noted the whimsical, ironic touches which made the central image of A Bloody Habit so memorable. Eleanor suggested adding a detail which would represent the narrator, Athene Howard. Athene, goddess of wisdom, seemed a perfect counterpoint to the demonic influence of the moon.

There are many elements used to represent the goddess Athene in art. After discussion, they settled on a Eurasian eagle-owl (Bubo bubo). This wide-ranging predator of the night unintentionally shares an interesting aspect of Athene’s character: the daughter of an English expat/apostate priest and a Frenchwoman (now dead), Athene has spent most of her life in Paris. Like the Bubo bubo, her association with England is highly questionable. She is functionally fatherless and fatherlandless.

Thus supplied, Matthew finished the illustration to thunderous applause and passed it off to Rhonda.

For the cover design, Rhonda’s foremost goal was to mimic the cover of A Bloody Habit (see inset) but without copycatting it. She had the right illustration, and from there it was a matter of picking and choosing which design elements from A Bloody Habit to carry over.

She quickly figured out that the cover’s composition would be vastly different. Father Thomas Edmund Gilroy, with his amiable girth, upraised hand, and wide cappa, fills the width of the cover, and so the designer at Ignatius centered the illustration on the page. Brother Jean-Claude, however, is long and lean and therefore needed to placed off-center, lest the page contain unsightly blank space.

(Pause here for a consideration of Dominican versus Franciscan ascetical practices.)

Also, against her usual preference for close-up details and pulling images out to the bleed line, Rhonda was determined to retain the entire illustration on the cover. The team gave considerable thought to every detail, from the moon to the clawed toes, and it only seemed right that all of Brother Jean-Claude appeared on the cover.

From there, the design quickly fell into place. Rhonda found an image of Victorian-era wallpaper with a classical pattern which fit the book’s Gothic and classical themes perfectly. She colorized the wallpaper and added a canvas texture, gradients, and other filters. The vertical stripes framing Fr. Thomas Edmund on the cover of A Bloody Habit did not work with an off-center werewolf, so she added a vintage-inspired page frame instead. The cover’s fonts hint at the Gothic and the book’s fin-de-siècle setting. The earthy brown, green, and gold color scheme is an homage to the Franciscans; the moon is honey colored, and the owl’s eyes are as preternatural an orange as she could manage.

In the eleventh hour, a debate arose. Eleanor suddenly realized that, although the early conversation took for granted that there would be lurid blood on the cover, the final design displayed no gore. She and Rhonda began tossing around ideas for adding these garish touches. One of the challenges was placement: where should there be blood?

This discussion was intensified when Eleanor and Rhonda both casually solicited the opinion of spouses. Eleanor is married to a philosopher and Rhonda is married to a theologian, and both husbands, in a spirit of scholarly esprit de corps, flipped the question around: should there be blood on the cover? The wives were in favor; the husbands were united in their opposition. This evolved into a debate over the purpose of book covers and the nature of the werewolf. Is the werewolf an object of pity, howling in psychic torment as he is transformed by moonlight, or is he a vicious creature thrilling to the sensation of a fresh kill? Is he both? Should a book cover illustrate precise moral degrees of lycanthropy, or should it to capture the gestalt of the novel? (The question: “Should novelists marry philosophers?” was set aside for debate at another time.)

In the end, the husbands were outvoted in this matter of displaying vital fluids and its meaning. Rhonda added blood. Eleanor asked for more blood. Rhonda added more. Eleanor asked Rhonda to make the red more garish. Rhonda brightened the red. Then Karen Ullo, Eleanor’s managing editor, asked for even more blood. Rhonda did, but then said, “Okay, that’s enough. I know you two both write horror fiction and are rather fond of blood-sucking and decapitations, but this is getting a bit excessive. And that red against the green is… whew!” Which, apparently, was the point.

Then Matthew caught wind of Rhonda’s lackluster paint job and intervened. Final adjustments were made, and voilà! The cover: